Critical situation!
The industry lacks hundreds of thousands of coders, and wages keep rising. Be a hero!
Save the industry
We'll teach you all you need to pay the bills from the comfort of your home.
Learn IT
Master Object-Oriented Programming in Python!

As we did in the Python basic constructs course we'll create what must always be done when you encounter a new paradigm in programming, a "Hello World" program. A Hello object world program, to be precise!

We'll start by opening IDLE (or any other editor) and creating a new file. We create classes using the class keyword. We'll name our class Greeter. Since there's gonna be a block of code, we write a colon : after the class name. The first line looks like this:

We name classes using CamelCase, meaning that the first letter in every word in the class name is capitalized and we don't write spaces. The name, of course, shouldn't contain any accent characters, if your native language uses any, you can use them in strings, but never in identifiers. We're going to create a "greeter" object using this class later, which will be able to greet the user. You might've noticed by now that we're treating the program in a different way, for every action, there is some object responsible. In our case, it may seem useless, but in more complex applications it'll prove to be more than worthwhile

In Python, we declare methods similarly as functions. We use the def keyword followed by the method's name, which we write in lowercase. In the case the name has more words, we separate them with underscores _. Parentheses with parameters are required. The first required positional argument is self. A "pointer" to the object the method belongs to will be passed through it. In the method body, we'll write code that prints a message to the console.

We could name the first parameter, self, differently, but let's follow established practices.

We'll create an instance of the Greeter class now. Which will be a greeter object that we'll be able to work with. We store objects in variables and use the class name as the data type. Instances usually have the same name as classes, but with the first character in lowercase. Let's declare the variable and then store a new Greeter class instance within it:

Since now we have a Greeter class instance in a variable, we can let it greet the user. We'll call the greet() method as greeter.greet(). We will also add input() into the application. So our code will look like this:

We have successfully made our first object-oriented app!

The syntax of the method parameter is the same as the syntax of a variable. If we wanted more parameters, we'd separate them with commas. Let's modify the code below the method as well:

Our code is now in a method and we're able to call it multiple times with different parameters. We don't have to copy "Hello ..." twice. We'll separate our code logically into methods from now.

Let's add some attribute to the class, e.g. a text where the greeting will be stored. We declare attributes as variables as well. We then access them using self.. Here's what your class should look like at this point:

Since we don't have a constructor method, we have to initialize the text before calling the method which requires it:

In object-oriented design, it's not recommended to let each object control the input and output, i.e. printing lots of stuff into the console. Each object should have a single responsibility and shouldn't exceed its purpose. Let's make our object solely responsible for creating the greeting text, and we'll move the printing outside the object. The advantage to designing objects with a single responsibility is that they're then universal and reusable. Our object can only print text to the console now, but we'll change it so the method will only return the text and it'll be up to the recipient to decide what to do with it. Like this we could store greetings into files, print them on websites or process them further.

Now, our code follows the guidelines of good OOP and over all programming practices. We will also add comments in our class accordingly. We'll add comments below the class name and the name of each method. We'll use the triple quotes """ to write comments. If we enter the help() command to the interactive console in IDLE (Windows command line doesn't support unicode) and pass the class name as a parameter, it'll display its description and the description of all its methods. A fully documented class might look something like this:

Let's check and see that IDLE will actually display the descriptions: 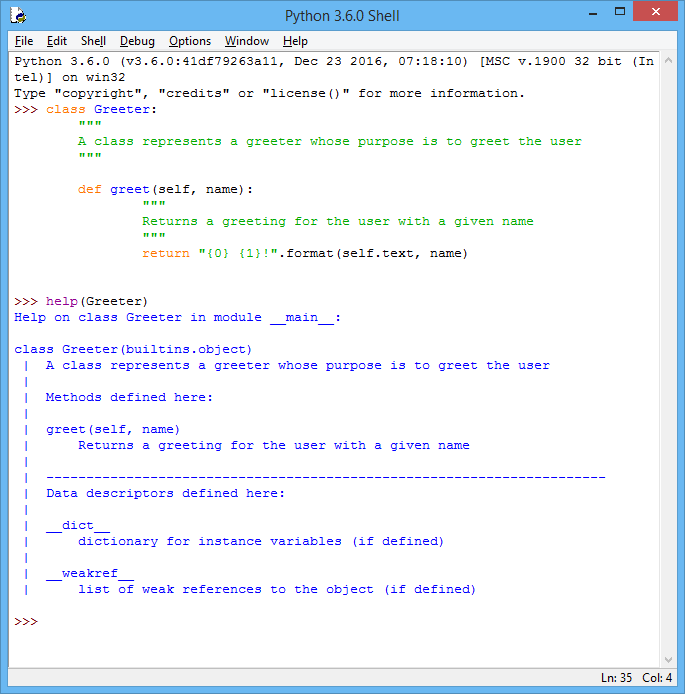 Great! Our program already has some quality to it, despite it being relatively useless. If you want, you can try to create an object-oriented remake of our console calculator. In the next lesson, RollingDie in Python - Constructors and random numbers, we'll program a simple game. We'll make two objects, warriors, compete in an arena, which will also be an object. See? Now you have something to look forward to!