We'll teach you all you need to pay the bills from the comfort of your home.
Learn IT
Want to work from home? We got your back!
Learn IT
Master Files and I/O in C# .NET!

In the previous lesson, Introduction to working with files, we got acquainted with writing privileges in Windows operating systems. The simplest way to store application data on the hard drive is to use text files. I'm sure you all have already encountered files with the .txt extension. The text is simply stored there on multiple lines. Lines are separated by special characters, which are unfortunately OS-specific. Fortunately, C# solves this problem for us.

Note: On different projects online, you may encounter using different classes and approaches for writing into files. The .NET framework was developed over time and provides older, more complicated structures for backward compatibility's sake. I'll show you the simplest and latest approaches.

Writing text to a new file

First, let's create a new text file and write something into it. Create a new project (a console application) and name it TextFiles. The .NET framework provides the StreamWriter class for us which is used to write into text files.

Now, go ahead and add using System.IO into the source code. Next, we'll create a using block and create a new StreamWriter instance inside. As we already know from previous lessons, using will automatically close the file once the reading/writing is finished. We'll specify the path to our file in the constructor:

Our StreamWriter now points to the appropriate file. We write a new line in text files using the WriteLine() method. Once we're done writing, we'll have to call the Flush() method, which takes care of emptying the buffer. We won't have to deal with any of that, all we have to remember is that any written lines may remain in the buffer memory for a while, so we force to write them using the Flush() method.

At this point, the code looks something like this:

Once we run it, a file named file.txt will be created in our project folder, specifically, in the bin/debug folder. We have already gone over how to handle file path and writing privileges in C# .NET correctly, so we won't deal with any of that here so as to keep the code simple. As you can see, the file now exists and contains the text we designated: 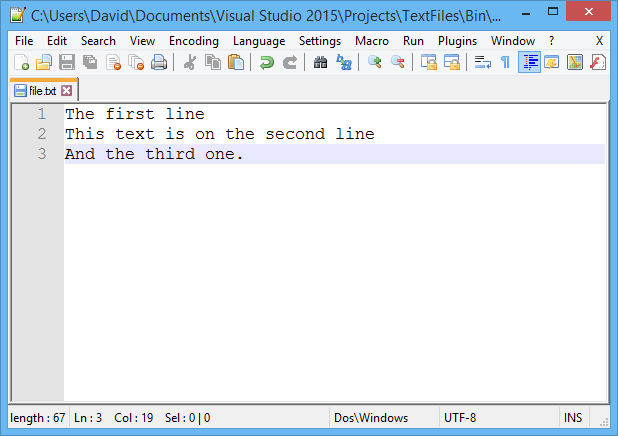 Appending text to an existing file

If the file doesn't exist, the code above will create it. If it does exist, it will be overwritten. This behavior can be altered by specifying the second parameter in the StreamWriter's constructor. If we set it to true, it'll append text rather than overwrite it. We add a new line to an existing file like this:

Another parameter that may be passed is the encoding, but UTF-8 is default, which should suit us in most cases.

The only thing left for us to learn is how to read a file. It isn't any more complicated than writing. As usual, there is a .NET framework class for it - StreamReader. It works pretty much like StreamWriter, but instead of the WriteLine() method we use ReadLine() which returns a line of text from the file and moves to the next line. With this in mind, we'll call it in a while loop. The condition to avoid reading beyond the file may seem a little tricky, however, all we're doing is checking whether the line has been assigned to the variable.

The code to print the file contents to the console would look like this:

The code for our entire application now looks similar to this:

The .NET framework contains the static File class with pre-made methods that don't fully replace the StreamReader/Stre­amWriter classes, but we might get by without them in most cases. The last example, which prints all of the lines in a file could be written as follows (don't forget to add using System.IO):

The ReadAllLines() method returns all of the lines in a text file as an array of strings. If the file isn't too large, this method is much easier to use. There are other similar methods in the File class such as WriteAllLines(a­rrayOfStrings, pathToFile) or AppendAllLines(a­rrayOfStrings, pathToFile). The first one writes lines from a string array into a file, the other appends lines from a string array to an existing file. The class also includes methods that don't work with lines, but with continuous text. These are WriteAllText(text), ReadAllText(), and AppendAllText(tex­t).

In this article, we've omitted exception handling and writing privileges. Next time, we'll look into storing objects into files.

Previous article
Introduction to working with files
All articles in this section
Files and I/O in C# .NET
Skip article
(not recommended)
Storing objects in the CSV format in C#
Article has been written for you by David Capka