PHP professional, $7000 a month. Like the sound of that? We'll get you there for $120.
PHP e-shop course
Home
Want to work from home? We got your back!
Master UML!

In the previous lesson, Introduction to UML, we introduced the UML language and learned how it improves both analysis and design of information systems. In today's UML tutorial, we're going to start with Use Case diagrams.

The Use Case diagram captures system behavior from the user's point of view. The purpose of the diagram is to describe the features of the system that the client or we expect. The diagram describes what the system should be able to do but does not say how the system will do it. Therefore, it's usually the first diagram we create when designing an information system. It's important to agree on what our system (or application, game, anything) should do at first. Only then it makes sense to ask how we're going to actually do it.

A use case diagram consists of use cases, actors, and relationships between them.

A use case (or just UC) is a set of actions that lead to a particular goal. A use case can be posting a comment to an article, registering a new user, or printing a document. It defines one feature provided by the system which is being designed. This feature consists of other actions, e.g. posting comments will include user authentication, validation of entered data, writing into the database, and so on. These actions are not in the diagram. UML often uses the "black box" principle. We omit internal logic and work only with components. The UC diagram utilizes this principle.

A use case is usually drawn as an oval with its name inside.

Actor is a role that communicates with individual use cases. A user or an external system can participate in this role. Thus, actors can be, for example, a User, an Administrator, an SMS server, or even a Timer. An actor initializes a use case (e.g. the user posts in a forum). In this case, the actor would be active. An actor can also be initiated by a use case (e.g. an external SMS server is initiated by the SendSms use case). In this case, we'd say the actor is passive and draw it on the right side of the diagram.

Actors are portrayed as little stick figures with the name written below them.

Now, let's try to create a sample UC diagram. As you all know ICT.social, we're going to design a similar system, but much simplified. We'll use this sample system through the entire UML course. In fact, we will design our own ICT.social using several UML diagrams. A description of its functionality using the Use Case diagram would be as follows: 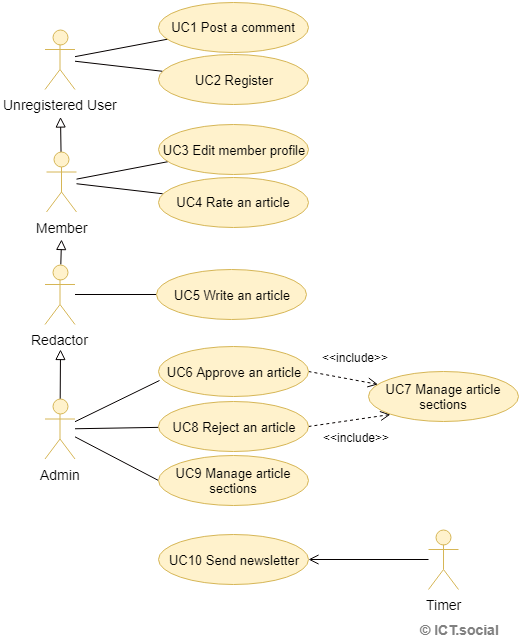 We can see that it's not difficult to draw the diagram. However, it needs some practice to end up with a reasonable number of use cases which equally cover the functionality of the system. Since some diagram is always better than none, don't be afraid to use it

Next time, UML - Use Case Specification, we'll say something about the UC specification and show another use case diagram. It'll be a more complex system this time.