In the previous lesson, MySQL step by step: Data Types and NULL, we went through data types and explained the NULL value. Today, we're going to start with a simple content management system, that will look similarly to the one here at ICT.social. We're going to show queries through multiple tables.

In the next few lessons, we're going to create kind of a simlified ICT.social database. First of all, let's talk about how it's going to look like. Today, of course, we're going to make just a small part. And because a picture can tell more than a thousand words, let's start right with it: 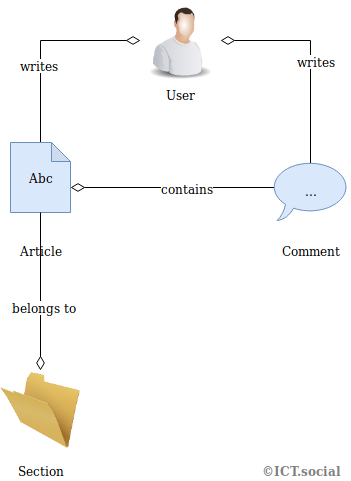 What you see is a conceptual model. It's created using the UML notation (a graphical language) and in practice, we create these kind of diagrams very often created before we even start writing any code. This way, we can think about what we really need to create.

As we can see, the system user can write comments and articles. The articles belong into sections. So it's a database of a very simple content management system, which you can certainly imagine thanks to ICT.social.

Today, we're going to focus on queries through multiple tables. Let's create some tables first. Tables for the users and articles will just be enough for us right now.

Because the CMS user's going to have a different structure than our current user, we're going to create the user table again. Let's drop the current one:

Then we'll create a new table. The user's going to have (besides its id) a nickname, email, and password:

Let's insert some users right away:

We're talking about the 1:N relationship (1 user can have N (multiple) articles and each article belongs exactly to one user). The part (here our article) always stores the id of the whole (the user in this case) where it belongs to.

The article will contain (in addition to its id again) the author id, short description, url, title, content and the publication date. Let's create the article table:

The only thing worth mentioning is the use of the TEXT type for the article content.

Next, we're going to add articles and assign users as authors to them. I took 4 articles from ICT.social, which I greatly shortened and simplified. The query looks like this:

Now, we have the articles in the database and the users assigned to them. Let's make a query over these 2 tables, get the articles and join the nicknames of their authors to them. I didn't use the word "join" accidentally, the command to access another table in a query is called JOIN. Let's write the query and then explain it. We're going to write queries on multiple lines to make them more readable:

In the first line of the SELECT statement, we select the columns as they were all from a single table, simply listing what we're interested in. Since we're selecting articles and attaching the users to them, we select from the article table. To attach data of another table, we use the JOIN clause specifying the table we want to attach, and then the ON clause. ON is similar to WHERE, but it only applies to the attached table and not to the one which we primarily select the data from. In the condition, we define that to every article the user whose user_id is stored in the author_id column should be attached. We ordere the results by the users' nickname. In case we needed just some of the articles, we'd place a WHERE clause before the ORDER BY, as we're used to.

The INNER and OUTER JOINs are two types of the JOIN statements. They work the same way and the only difference is what happens when the item, to which the relationship refers to, doesn't exist.

If we use just the JOIN keyword in an SQL query, it's considered an INNER JOIN by MySQL. If there's no user with the id that is stored in the article, such an article without a user wouldn't be included in the results. The relationship is unbreakable.

Let's try it. We'll add an article that'll refer to the id of a non-existing user:

The inserted article refers to a user with the user_id equal to 99, who is not in the database. Let's run our SQL query with the JOIN again. Just to be clear, it's better to define that we want the INNER JOIN explicitly:

The results are still the same, and the article without an author isn't in the results.

OUTER JOINs allow you to select even those results, that have failed to join due to missing entries. Let's try the LEFT JOIN, which considers the result valid even if the left part of the join condition (article) exists and the right one (the one that's being joined, the user) doesn't. The columns of the part being joined will contain the NULL value:

We can see that the article's been selected anyway, even the right part (the one being joined, the user) hasn't been selected. Before we join tables, it's a good idea to think about whether the join can fail and what we want to happen in that case. In a real application, this probably shouldn't happen.

Similarly, as the LEFT outer JOIN considered the result valid when at least the left part existed, the RIGHT JOIN does the opposite. If there's the user (the right part being joined) and there's no article (the left part), it's still going to be included in the results. Personally, I haven't used this JOIN yet. We already have one such user in the table, it's Emma. Let's try the RIGHT JOIN:

As expected, the article without an author disappeared, and the Emma showed up.

We'd certainly find some other JOIN statements in MySQL, but this is enough for our purposes.

Using the WHERE clause

Theoretically, we can avoid using JOINS and use the FROM and WHERE clauses instead. In FROM, we can list multiple tables separated by commas. Then, in WHERE, we specify the condition to join the table. Ideally, the database converts this query to the INNER JOIN first and then processes it.

The results are the same as with INNER JOIN:

The disadvantage of joining with the WHERE clause is that we wouldn't be able to perform all kinds of JOINs and in some cases, the queries can be less optimized. We never know how the database will optimize such a query and it will vary according to the used database. Let's consider this approach rather a curiosity than for a real use.

In the next lesson, MySQL Step By Step: More Queries And the M:N Relationship, we'll continue with queries through multiple tables and add another database part of our content management system.

Previous article
MySQL step by step: Data Types and NULL
All articles in this section
MySQL Database Step by Step
Skip article
(not recommended)
MySQL Step By Step: More Queries And the M:N Relationship
Article has been written for you by David Capka