We'll teach you all you need to pay the bills from the comfort of your home.
Learn IT
PHP professional, $7000 a month. Like the sound of that? We'll get you there for $120.
PHP e-shop course
Master Object-Oriented Programming in Java!

In the previous lesson, Diary with a database in Java (finishing), we practiced working with List collections and created an electronic diary in Java. In today's tutorial, we'll be getting back into some more theoretical matters. We're going to unveil yet another utility of the object-oriented programming world!

If we store a Warrior class instance into a variable, we are able to call the attack() or defend() methods on it. Nothing new, right?

We'll give it a go, but on a simpler class than the Warrior class we made. We'll start by creating a new project, naming it InterfaceSample, and adding a simple class. In my opinion, theoretical concepts should be explained using light examples, meaning not as serious. With that all being said, let's make a bird class! Our bird will be able to chirp, breathe and peck. Our Bird class will look something like this:

Once you've created an instance of the bird class, write whatever you called the instance, in my case, it is "bird", and add a dot right after it. NetBeans will then display all of its class methods (you can also invoke this menu by pressing Ctrl + Space): 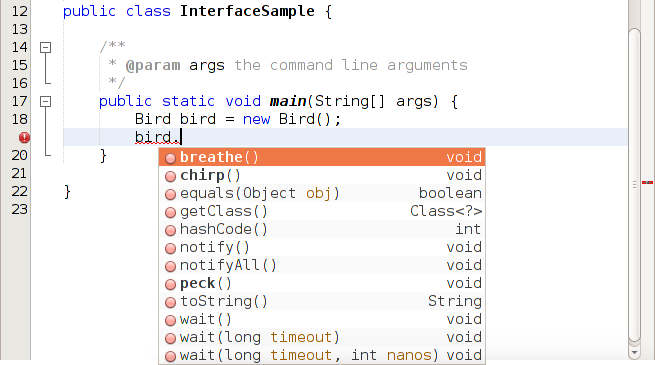 We now see everything that we can call on the bird instance. The 3 methods we just now implemented are there as well as some others that all objects have from its base.

Now let's create an interface for our bird. We'll use the interface keyword to do just that. Right-click on the project, and choose New -> Java Interface. 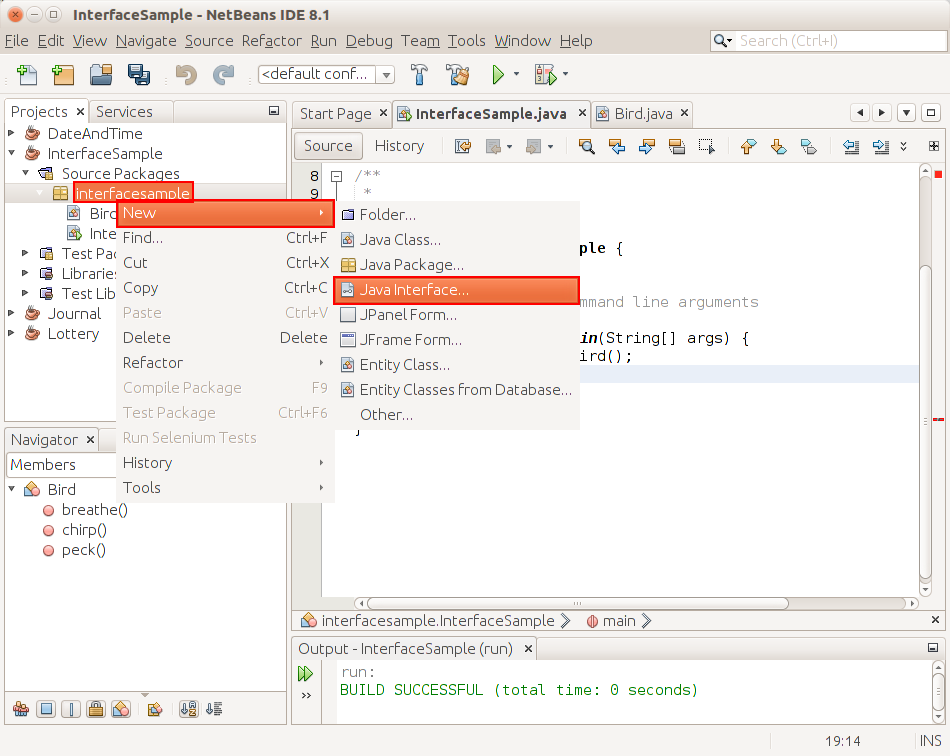 An empty interface will be added to our project. We'll add the headers of methods which this interface will require. The implementation itself, method content, is added later by the class that implements the interface.

Let's add method headers to the BirdInterface, we'll purposely omit one of them and only add chirping and breathing:

We don't specify the public modifier since an interface contains public methods only. It wouldn't make sense otherwise since it specifies how to work with an object from the outside.

Let's go back to InterfaceSample­.java and change the line with the bird variable so it won't be longer of the Bird type, but of the BirdInterface type:

When we go back to InterfaceSample­.java, the line with the variable of the BirdInterface type no longer causes an error. The Bird class correctly implements the BirdInterface interface. Meaning that Bird instances can now be stored in variables of this type.

Now just for completeness' sake, let's see what happens when we remove a method from the class, which is required by the interface, like the chirp() method. NetBeans will warn us that the implementation is not complete. Once you have visual confirmation of the interface's dependency on the class, put the method back where it belongs.

Let's write bird with a dot after it. Again, NetBeans will offer the following methods: 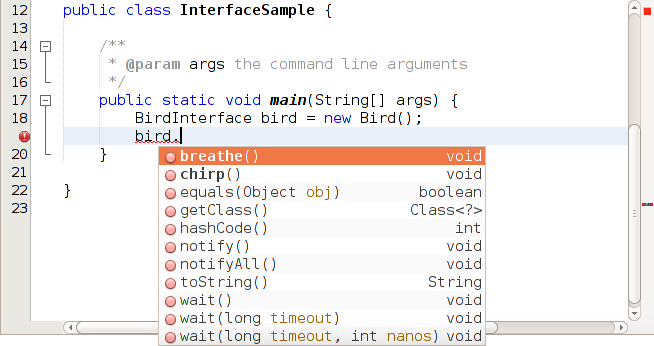 We can see that now we can call only the methods provided by the interface on the instance. That's because the bird is now a variable of the BirdInterface type, not the Bird type. Meaning that we cannot call the peck() method because we did not add it to the interface.

Java, like most programming languages, doesn't support multiple inheritance. Meaning that we can't inherit one class from more than one other class. Mainly, because method naming collisions could very well occur when multiple classes containing methods with the same name inherit their methods into another class. Multiple inheritance is often worked around using interfaces because we are allowed to implement as many interfaces in a class as we want. A class of the sort only allows us to work with its instances in ways that we want to. We wouldn't have to worry about of what object type it actually is, or what it provides beyond the interfaces.

Now let's add a LizardInterface to our project. Lizards will be able to breathe and crawl:

Next, we'll try "multiple inheritance", more accurately, implement multiple interfaces by a single class. We'll add a Pterodactyl.java class to the project. It will implement BirdInterface and LizardInterface interfaces:

If we click on the "light-bulb" icon, we can choose to Implement all abstract methods. NetBeans will then automatically generate the necessary class methods.

Notice that NetBeans has added the @Override annotation to methods implementing the interfaces. It's more clear this way so we'll add the same annotation to the chirp() and breathe() methods in the Bird class as well.

That's pretty much it! Now, let's add an instance of the Pterodactyl class in InterfaceSample­.java: 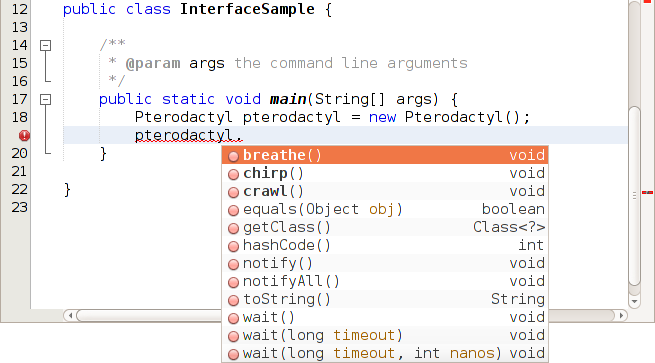 We'll stick to interfaces for a little while since there is much more to them that we haven't covered. In the next lesson, Type casting and object hierarchy in Java, you will learn more advanced techniques of the object-oriented programming.