PHP professional, $7000 a month. Like the sound of that? We'll get you there for $120.
PHP e-shop course
Home
Want to work from home? We got your back!
Master Design Patterns!

We use the Servant design pattern if we want to add additional functionality to several classes without interfering with their interfaces. The servant thus adds new functionality to us without having to be in the class. It's an idiom. So it is not included among the "right" design patterns from GoF. However, its use is sometimes very useful.

Sometimes we can get into a situation where we have a certain group of classes to which we want to add additional functionality. By direct implementation, however, we would have to copy this functionality to each of them, which would be a problem when programming or expanding the whole application (not to mention the fact that this violates the DRY principle). Another option, of course, is to define a common ancestor, but this is not always possible. The functionality that we want to extend the classes to may not be related to them at all. Classes would then have to take care of more things at once (the CFP principle, which is also very important in designing). In this case, we can separate the functionality into a separate class (we call it Servant).

It is actually a box for methods that serve instances of a particular group of classes. A servant is a separate class that contains methods that manipulate instances of the original classes (hereinafter only serviced). If we want to fulfil a certain task after a serviced class (for example, smooth scrolling - animation), we ask the servant for this task, to whom we pass an instance of the serviced class. The servant will then communicate with the served classes via some interface (e.g. IMovable - in this case it will provide methods like setPoint() and getPoint() so that we can move the object gradually). Of course, we must also implement this interface for all classes that the servant will work with. 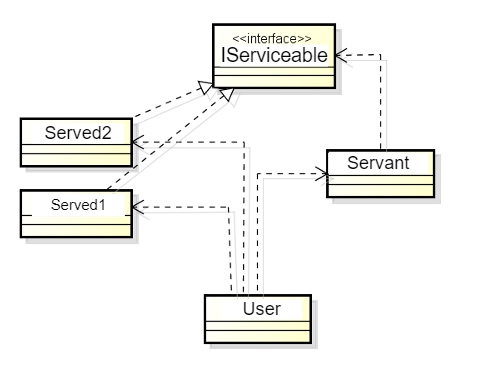 The operation is requested by the user from the servant itself 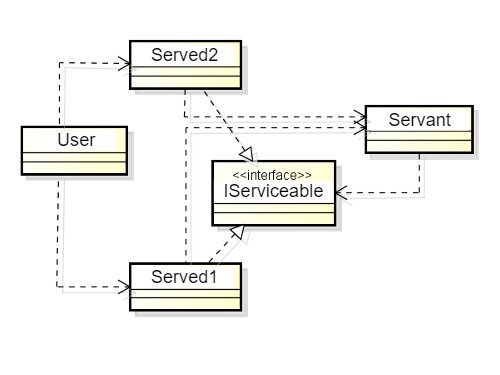 The operation is requested by the user from the serviced class

As we can read from the diagram, each class that wants to be served implements the IServiceable interface. The servant then only works with this interface. If we wanted an animation servant, we would probably need the already mentioned getPoint() and setPoint(Point) methods, thanks to which we could move the serviced instance (or some graphically the object it represents). The examples differ in the user's connection to the servant. While in the first case the user has a direct link to the servant, in the second it is called by the served classes and the user therefore has no direct link to it, which can be used for encapsulation, for example.

We will use the Servant pattern if we want to add an ability to a group of classes, and we do not want to implement it in the original class. It is implemented by a separate class that manipulates the serviced instance (or its interface). This is an idiom and is therefore not in GoF.