PHP professional, $7000 a month. Like the sound of that? We'll get you there for $120.
PHP e-shop course
Critical situation!
The industry lacks hundreds of thousands of coders, and wages keep rising. Be a hero!
Save the industry
Master Laravel Framework for PHP!

Welcome to the first lesson of the course for creating web applications in the PHP framework Laravel. Laravel is a complete framework for PHP that greatly simplifies the creation of web applications. It is a well-designed object-oriented and at the same time the most widespread PHP framework in the world. Thanks to its popularity, there are also a lot of instructions and extensive official documentation. Small and even large projects are built on it, some of them can be found on this page. It is also worth mentioning that the basic building block of this framework is the Symfony framework, but its knowledge is not necessary, as the two frameworks are quite different.

Laravel is based on simple and clean code. Laravel is notable for being optimized for real web applications. This means that everything is already ready and components can be generated using simple commands in the terminal. After you'll learn this framework, creating a website will take a fraction of code unlike pure PHP.

In today's lesson, we'll explain why we should use PHP frameworks in general and talk about how Laravel works.

Why use the framework

The framework is a comprehensive set of dependent libraries. You can't do serious projects in PHP without quality libraries. There are two reasons for this.

You can either create your own framework or use one ready-made, which is Laravel.

Laravel is mainly a large set of reusable components, on which the framework for creating web applications is built. When you program in the Laravel framework, you still program in PHP. In addition, you use object-designed components on the principles of the MVC architecture. Therefore, to use the Laravel framework, you should have advanced experience with PHP, know well object-oriented programming and at least the basics of MVC architecture. Learning Laravel without this knowledge is a waste of energy, because you probably don't understand its principles and you just lose your time. If you are unfamiliar with OOP or MVC, please read these two local courses first.

For diligent, I recommend to study software design so that you can understand certain practices that are used in this framework.

At the beginning we will describe the basic terms and ways how Laravel works.

As already mentioned, Laravel is an MVC framework, so it's probably good to review what that actually means.

The application consists of parts of three types, which are divided into 3 basic tasks:

Only such a divided application is clear and easy to expand.

Before the user gets to the controller, he encounters so-called routing. The task of this layer is to find out what the user wants from the URL address and to call the appropriate controller to handle his query.

Routes can be defined in several ways. The requested action can only be performed by a simple anonymous function defined by us, or the controller will take care of the given action. Laravel can even generate actions for us, which will probably be needed by each of our data entities (article, user, category, ...). Those who know more probably already know that I have CRUD (Create, Read, Update, Delete) on my mind, but we'll talk about that later in this series.

You need to be sure of what is going on inside when using the framework otherwise you are degrading from a programmer to an experimenter. Let's describe the life cycle of the application in the Laravel framework - i.e. what happens when the user enters something in the address bar, for example:

The life cycle of a page is simply shown in the image below. We'll describe it right away. 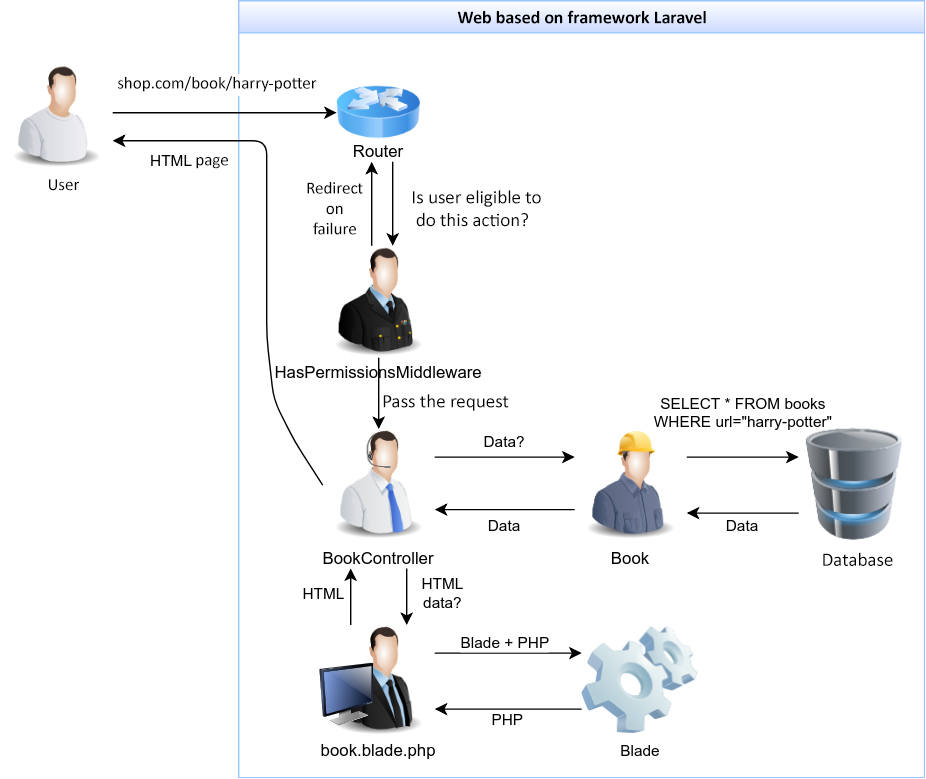 If you don't fully understand some of the steps now don't despair. We will gradually explain everything in the course. It's just a matter of understanding what's going on in the background and how complex one requirement can be. With the correct use of framework components, a parameter can easily go through dozens of classes before it even reaches the controller.

What else you should know

That would be all for an introduction.

User rating:
1 votes
Author is interested in programming mostly at web development, sometimes he does funny video edits from his vacations. He also loves memes and a lot of TV series :)
Activities
Comments

This course is written for the current Laravel, i.e. version 6.x

The current version is 7.x

Yes, that's actually true, but the version 6.x has long term support so it's better to make projects with this version so far.