Critical situation!
The industry lacks hundreds of thousands of coders, and wages keep rising. Be a hero!
Save the industry
PHP professional, $7000 a month. Like the sound of that? We'll get you there for $120.
PHP e-shop course
Master UML!

In the previous lesson, UML - Domain Model, we created a domain model and introduced the basic notation of classes in UML as well as the basic relationships between them. The domain model was a simplified version of the class model (diagram). In today's UML tutorial, we're gonna show some other relationships and create a class diagram.

The class diagram is a diagram of implementation. This is the difference over the domain model, which was rather a sketch of the system. The class diagram is real and therefore it must be complete. When the programmer implements in into code, the code must work. So all the classes of the application will be there. The classes will have all the attributes and methods. The diagram is platform specific, that is, specific for a particular programming language. It also means that no other characters than of the basic English alphabet are used in the identifiers. Attributes have language-specific data types, and so on.

The class diagram is a manual for the programmer. With our diagram, they should no longer solve any fundamental questions or problems, their work should be (maybe unfortunately

) routine. Experienced programmers and analysts are in charge of designing the system. Thanks to the design, programming the system itself can then be passed on to less experienced programmers, who are often cheaper. However, it's a good practice to create a diagram of the classes, even if we write the system for ourselves. This will force us to first think in the context of the whole system and then program it. This prevents such problems when we write half of the system and then find out that it won't work this way. Complex information systems can no longer be created without designing them first, and team work cannot be done without good design. The class diagram will also serve as documentation for further development.

Let's show the graphical notation of the class in UML one more time, now complete: 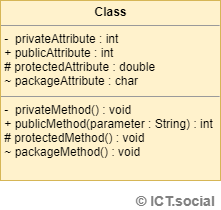 The first part of the rectangle holds the name of the class again.

In the second part, there are attributes and their data types. The access modifier is placed before each attribute. We have 4 options:

We definitely know the meaning of the first three modifiers from the object-oriented programming. A package attribute is an attribute visible across the whole class package (namespace).

We write a colon between attribute names and their data types.

The methods in the last rectangle are written in the similar way. It's possible to specify several more symbols, but we won't use them in practice much and therefore we'll omit them.

Apart from the domain model, we can use two more relationships here.

Let's proceed to the example and create a class diagram of ICT.social. Of course, it'll be based on the previous domain model. 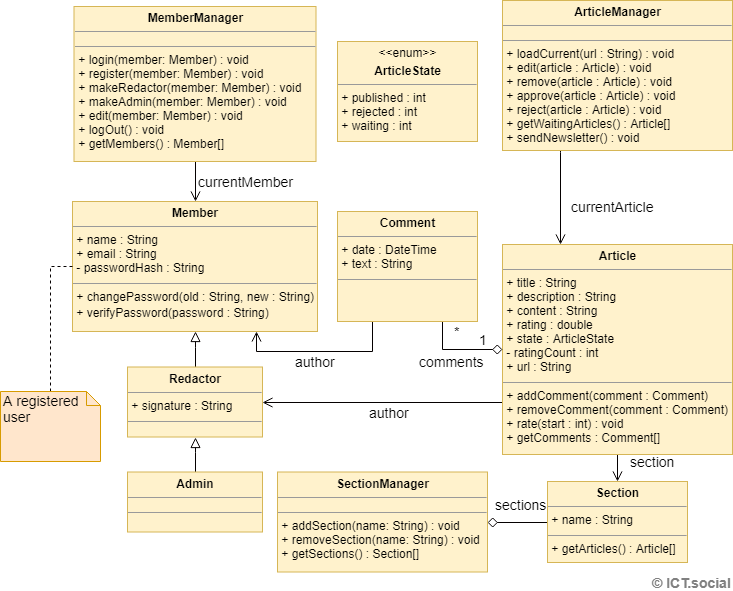 We can see that as opposed to the domain model, there are also service classes together with entity classes. We can see managers providing functionality related to some entities and holding the important instances of these entities such as the current article and the current user. It's always a good practice to detach such login into separated managers than to pollute entity classes with it. The domain model only mapped important entities from the business perspective and thus we didn't even think about how the system will actually work inside. With the transition from the domain model to the class diagram, the number of classes will always increase.

Notice the comment symbol on the left, saying that the class represents a registered user. We can comment any UML entity like this to provide additional information to improve communication. We should also mention the ArticleState enumeration type, which is drawn here as a class, and changed to the enumeration type using the <<enumerable>> stereotype. We've already described the rest of the diagram, so let's take a look at it. As with all diagrams, it's just one possible way to design the system. There are other possibilities out there, and many of them would be also correct.

Next time, in the lesson UML - State Machine Diagram, we'll focus on class description and show an even more complex and practical example of the class diagram.

David learned IT at the Unicorn University - a prestigious college providing education on IT and economics.
Activities (3)
Comments

Where can I find c# code for class diagram example

Hi Nilesh, it's just a sample diagram so you can see how it looks like, it's not based on an existing project.

Reply 16. April 14:39
You can walk through a storm and feel the wind but you know you are not the wind.

Want to learn c# ultimate goal is project completion. With presentable documentation. Can you pls guide me how proceed.

Then you don't need to study UML now but learn C# first and create a project. Then you can use UML to document that project. Start with C# basics here - https://www.ict.social/csharp/basics then continue with OOP, then you can come back and create a nice class diagram of your project