Critical situation!
The industry lacks hundreds of thousands of coders, and wages keep rising. Be a hero!
Save the industry
PHP professional, $7000 a month. Like the sound of that? We'll get you there for $120.
PHP e-shop course
Master Software Architectures and Dependency Injection!

We're getting back to the topic which is asked in most job interviews. You'll definitely hear the question "What is the three-tier architecture?" Since we've already explained the two-layer architecture, there's not much more ahead. The third layer shows the result to the user, which we could omit in the two-tier application since the user was just a machine working with raw JSON.

The application layers will be:

Just to be sure, let's describe what the layers will do once again: 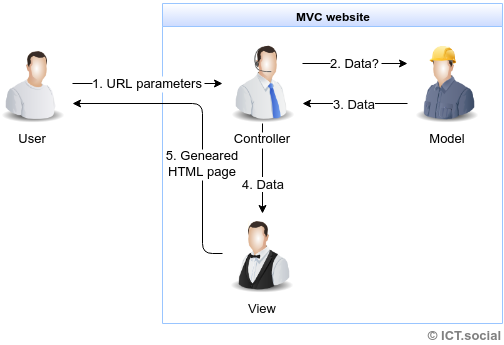 The life cycle of a request to a three-layer MVC application will be as follows:

The model will stay the same.

Instead of using echo() and `json_encode() to print the data, the controller prepares variables for the template, and then loads the template:

The new application layer is now a view, a template. That's an HTML code with a small addition of some other language's syntax used to iterate over the data and to insert variables. We use a loop to iterate the $data variable retrieved from the controller.

The completed template is then sent to the user. It looks like this:

So, we improved our sample application a lot. Although we've passed the dependencies manually so far, the app is now separated as follows:

You can compare the current progress with the example when everything was in a single file. However, it's also necessary to imagine that each application part is complex enough to show the value added by separating these parts.

And what about form applications? If the application is not a web-based but a desktop application, of course, there is some similar automatic mechanism above our code calling the right class representing a form or whatever the user is communicating with. The Controller pattern can really be applied everywhere, and we should definitely do that. You've already created a form application for sure, the class handling the form controls was a controller. For example, in JavaFX, classes are even named controllers, but, for example in C# .NET, they are called CodeBehind, even though they are controllers. Be honest, have you ever written your logic directly to this file handling the form?

So now you know that you should have encapsulated logic into separated models. Just like we've shown it on the cars web app.

In the next lesson, Wrong ways of passing dependencies - Static members, we'll finally talk about passing dependencies. We'll show what happens if we don't pass dependencies at all but create new service instances every time. We also show antipatterns as a passing by static attributes, Singleton and ServiceLocator design patterns, and different variations.

If you are having problems with MVC or you are interested in it, take a look at our separate PHP course on this architecture - Simple object-oriented CMS in PHP (MVC).