PHP professional, $7000 a month. Like the sound of that? We'll get you there for $120.
PHP e-shop course
We'll teach you all you need to pay the bills from the comfort of your home.
Learn IT
Master Object-Oriented Programming in JavaScript!

In the previous lesson, Introduction To Object-Oriented Programming In JavaScript, we explained the whys and hows of OOP and took a quick peek at some actual OOP code in JavaScript. Today, we will be going deeper into detail of how OOP works and create our very first object-oriented application in JavaScript.

OOP's main purpose is to simulate reality as we perceive it. In other words, we no longer have to care how the program is seen by the computer, instead, we focus on our own perspective. They replaced the assembler with human readable mathematical notation and then that was replaced with OOP. Meaning that there is a certain level of abstraction above the program when OOP is put into use. This has significant advantages because it appears to be more natural and clear to us.

A unit in OOP is referred to as an object which may very well emulate an object in the real world (e.g. human or database objects).

Each object has its own properties and methods.

Object properties are data that it stores. For example, a human's name and age, or a database's password. They are simply variables, with which we have worked hundreds of times. Occasionally they are referred to as the object's internal state. Properties are bound to objects, which is how they differ from local variables (the kind of variable that we've been using up until now).

Methods are abilities that the object can perform, meaning its functions. Humans, for example could have goToWork(), greet(), or blink() methods. Whereas for databases, addEntry() or search() would be more suitable. Methods can have parameters and may also return a value. Methods are bound to the object, which is how they differ from functions, which are global and a major problem of non-OOP code.

We know methods very well, for example we used the write() method on the document object. In fact, document is an object that represents a document in reality. You can see that we can simply imagine that we are dealing with a document, ordering it to do something or setting something to it. It contains methods that the document can perform (writing, selecting elements, replacing ...) and has some properties, such as title, which contains its title.

In older languages, functions didn't belong to objects but were loosely placed in modules (units). We could call them by typing split(text) instead of text.split(). The disadvantage to that was, of course, that the split() function didn't belong to anything. There was no way to list what string could do and the code was messy. Additionally, we couldn't have two methods with the same name. In OOP we can have both user.remove() and article.remove(). It's very clear and simple. In a structured program we'd have to write: remove_user(user) and remove_article(article). We'd have to create thousands of silly, unnecessary methods. If you're thinking, hey, isn't that what the PHP language does? You are absolutely right. PHP is terrible when it comes to things like this, and for that same reason, its design is considered old. It became fully object-oriented later, but its foundations will probably never change.

In 2015, which is quite recently, JavaScript went through major changes. One of them is a support of a modern way of creating objects using classes. This approach is also significantly easier and therefore we'll use it to explain OOP. OOP is already an advanced concept itself and there's no reason to make it any more difficult.

Classes in JavaScript work as syntactic sugar. That means they allow programmers to write simpler and more readable code, but internally, the commands are rewritten to work with prototypes. These were the only reasonable way to work with objects in JavaScript in the past. Of course, in order to be able to edit older source codes and understand how OOP in JS works internally, we'll also explain prototypes in detail in the course. But now back to the classes.

To create an object, we must first create a class. A class is a pattern, based on which we create objects. In other words, it is an extensible program-template used to define properties and abilities.

An object that is created using a class is called an instance. Instances have the same interface as the class used to create them, but mutually differ in their internal data (properties). For example, imagine that we have a Human class from which we create carl and jack instances. Both instances certainly have the same properties (e.g. name and age) and methods (goToWork() and greet()) as the main class, but the values within them are different. For example, the first instance's name property has the value of "Carl" and the age of 22. Whereas the same properties in the second one have "Jack" and 45 as values. 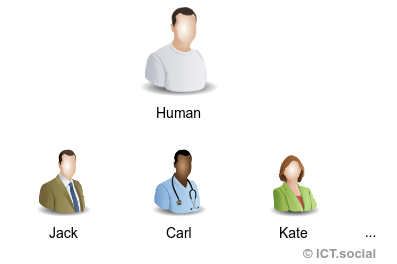 Object-oriented programming itself does not actually know the term object, it only distinguishes classes and instances. If I mention an object in the articles, I mean an instance.

Communication between objects is performed via messages. A message looks something like this: receiver->methodName(parameters). In our case, it would be something along the lines of carl.greet(neighbor), which would make the carl instance greet the neighbor instance.

At the beginning of the JavaScript Basic Constructs course we created a Hello world script. It wrote "Hello ICT.social!" to the page. Let's do a similar program as an introduction to object-oriented programming. Let's program Hello object world!

Create a folder, you can name it hello_oop/, and create a js/ subfolder in it for the JavaScript files.

As we explained, for each action there's going to be an object responsible from now on. This division of logic into objects is sometimes also referred to as responsibility assignment. A different object is responsible for each part of the application, and it's declared in a separated file.

To greet the user, we'll create a greeter object for which, as we already know, we need a Greeter class. We name classes using PascalCase, the first letter is uppercase to specify it's the pattern, not an object. Of course, we don't use any accent characters in class names as well as in the identifier names in general. Individual instances, the greeters we create, will be then named using camelCase, i.e. the first letter will be lowercase.

We'll create a Greeter.js file in the js/ folder. Its contents will be as follows:

Now we'll create an instance of the Greeter class. It'll be the greeter object we'll work with. We store objects in variables. Typically, instances has the same name as the class, only the first letter is lowercase. Let's declare a greeter variable and then create a new instance of Greeter class in it. And we'll let it greet the user.

In the js/ folder, we'll create a new file named app.js and put the following code into it:

We used the const keyword to store the instance. In the JavaScript Basics Course we created variables mainly with let. Since we are already advanced, we'll try to declare variables that do not change using the const keyword. JavaScript then watches us so that their value never changes. And we don't want to have anything other than this greeter stored in this variable ever.

Attention. A common mistake is that people think that an object stored in a variable declared using const is immutable. If the greeter had some properties, we could simply change them, we just can no longer assign any other object to the greeter variable.

We have everything ready so we'll just load our scripts. Therefore, we'll create the index.html file in the project's root folder with the following contents:

The code is trivial and basically just loads both our JavaScript files.

Let's end today's lesson with a look at our first working object-oriented application:

It's important that we realize that it's now the object that has the function. If anything goes wrong for you, download the sample project in the attachment below to find your bug.