Home
Want to work from home? We got your back!
Learn IT
We'll teach you all you need to pay the bills from the comfort of your home.
Master Files and I/O in C# .NET!

Lesson 4 - Storing objects in the CSV format in C#

In the previous lesson, Working with text files in C# .NET, we showed you how to write and read text files. The application we made was simple, like from a textbook. Let's create a real user database today using text files. Of course, we're going to store objects, so you can easily alter the program to store diary reminders, high scores for a game, animals in a shelter, or whatever you need to store.

We don't have to invent a complex method of storing data in text files because a proven and standard one already exists. This approach is called CSV (Comma Separated Values), where values are separated by commas or semicolons. We mentioned CSV in the article about the Split() and Join() string methods. In today's tutorial, we're going to need them.

Let's agree on what the User class will look like. Once we establish that, we'll demonstrate how its instances will be saved in CSV. Create a new project of the Windows Forms Application type. Then, add a User class to it. We'll store their names, ages, and registration dates. The constructor will initialize the instance based on these three properties. We'll override the ToString() method so it'll return the user's name. The class will look like this:

Now, let's take a look at how users will appear in the CSV format. Each line will represent a single user. The user's properties will be separated by semicolons. For example, a user named John Smith, who is 22 years old and registered on March 21, 2000, would look like this:

We can see at first sight that the file is relatively easy to read. However, anyone who isn't aware of the application's design probably won't guess what the number 22 represents and what the date is for.

Since we're programming according to object-oriented practices, we'll create a class for our database as well. It'll contain a collection of users, represented by a List class instance. The collection will be private and adding users (or deleting them, searching for, etc.) will be done using public methods. Finally, the database will contain methods to load the CSV file and to store the database contents to it. The filename will be another one of the database's private fields. Add a new class, named Database, to the project and prepare its methods:

Visual Studio will then underline the ReturnAll() method in red because it doesn't return a value, but we'll ignore that for now. We'll do it all step by step starting with the constructor.

In the constructor, we'll create a List instance and store the path to the database file:

That was very easy, so we'll move right on to next method:

The ReturnAll() method will return all of the users. Similarly, we can create methods for searching for certain users. We'll return the users as an array.

Saving the users to CSV

Now, we'll finally get to work with the CSV file. Let's start by adding a using block with a StreamWriter instance. We'll iterate over our user list internally and create a string array for each user based on their properties. We'll have to convert all of the non-string properties explicitly to strings. Then, we'll join the array to make a long string in which the items are separated by semicolons. We'll use the Join() method to do just that. Unlike Split(), we call the Join() method directly on the String class and we specify the "glue" (the text used to join the items) as a string, not a char. Let's get right to it:

If we only used the ToString() method to convert the date to a string, it would store the time as well, which is not what we want in this case. Let's try it all out, start by moving to the Form file (Form1.cs or press F7 in the designer). We'll create a private database field to which, in the form's constructor, we'll create an instance of our database:

Now, let's add a new button to the form, name it saveButton, and set its Text to "Save". 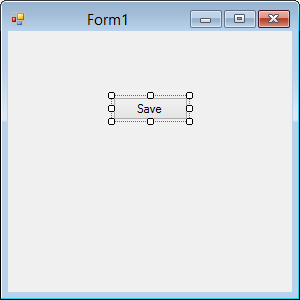 In its Click handler, which is generated by double-clicking the button), we'll add 2 users to the database. It'll only be for testing purposes now, the application will look better later on. Next, we'll store the entire database into a file.

Run the application and click the button. Now open the users.csv file in Notepad (in project/bin/debug), which should have the following content:

All of it works as it should

We'll finish the application and be able to load users from the file in the next lesson - Storing objects in CSV format in C# .NET, part 2.

Previous article
Working with text files in C# .NET
All articles in this section
Files and I/O in C# .NET

Continue learning
Storing objects in CSV format in C# .NET, part 2
Article has been written for you by David Capka