Learn IT
We'll teach you all you need to pay the bills from the comfort of your home.
PHP professional, $7000 a month. Like the sound of that? We'll get you there for $120.
PHP e-shop course
Master C# .NET Basic Constructs!

Lesson 1 - Introduction to C# and the .NET framework

Are you looking for a quick reference on .NET framework instead of a thorough-full lesson? Here it is:

C# programs are instructions for the CLR virtual machine which is part of every Windows:

Welcome to the first lesson of the C# .NET course. This course is all about the C# language and the .NET framework. We'll go through step by step, from the very beginning to the more complex structures, object models, databases, and web applications. With a little patience and persistence, you will become a good programmer.

Computer processors can perform a limited number of simple instructions, which are stored as a sequence of bits, i.e. numbers. In most cases, the aforementioned instructions are written using the hexadecimal system, so as to make reading them less of a chore. However, the instructions are so limited, that all you can really do is sum up addresses and jump between instructions. As you may already know, in the world of programming, one does not simply add two numbers together. What we do, is look at the numbers' addresses in memory and then sum them up (which takes multiple instructions). Here's what adding two numbers would look like in the hex:

The instructions are given to the processor in binary. This sort of code is extremely unreadable and is dependent on the instruction set of the given CPU. I assure you, it is extremely nauseating to program in this "language". Unfortunately, every program must be compiled in binary format so that it can be executed by a computer processor.

Assembler (ASM for short) is no simpler than machine code, but at least it's human readable! Here, the instructions have human readable text codes, so that people wouldn't have to memorize every single one of the number combinations. The instruction codes are later compiled into binary code. Adding two numbers up in ASM would go something like this:

It's a bit more human-readable, but most people, including me, would still have no clue how this program works.

Third generation languages finally give a good amount of abstraction of how the program is seen by the computer. Rather than forcing us to adapt to the computer's arcane way of thinking, the languages focused a bit more on how we see the program. Numbers were then perceived as variables and code had an almost "mathematical-notation" sort of aesthetic.

Adding up two numbers in the C language would go like this:

Pretty much anyone could assume what this program does just by looking at it. It sums 83 and -2 up, and stores the result in a variable named c. The main advantage third generation languages had over all of the previous languages was high readability.

As time went on and code optimization was in demand, object-oriented programming was brought into play, which we will get into later. Third generation languages are essentially divided into the following categories:

Compiled aka unmanaged languages have their source code in a language that people can fully understand. The source code must still be translated into machine code so that it can be executed by the processor. This translation is provided by a compiler, which compiles the entire program into machine code.

Compiled languages have the following advantages:

There are, as you may have guessed, disadvantages as well:

Examples of compiled languages include the C language, its object-oriented successor C++, and Pascal/Delphi.

Interpreted languages make an attempt to solve program portability issues, and make programmers' lives a bit easier. Interpreters work much like compilers do, but instead of translating the entire program all at once, they only translate what is needed at a given moment in time. Its name comes from the human profession of Interpretation. Where an interpreter is someone who listens and serves as a "middle man" for people who do not speak the same language. In other words, he/she translates what each person says to a language that they understand. The translation is done while each one speaks. Interpreted languages work in pretty much the same way. The source code is read line by line, compiled into machine code, executed, and then thrown away.

Interpretation is a waste of processor power, of sorts, and is not the fastest way to get things done.

What advantages does interpretation have, then?

PHP is an interpreted language. Most websites are written in this relatively easy language because it gets the job done right. Facebook uses a custom version of PHP, if you're interested, look up the "HipHop for PHP" project.

Languages with the virtual machine

Hmm, now what if we took the best of both approaches and left out most of the disadvantages? Thus, the virtual machine was born! Virtual machines are the most advanced kind of programming languages, currently the most widespread and the best choice for developing most applications. C# and Java belong to this category.

First and foremost, the source code is translated into what we call "Intermediate code". Microsoft calls it CIL (Common Intermediate Language), which is essentially machine code, i.e. binary. However, it has a considerably simpler instruction set and directly supports object-oriented programming. Due to its higher simplicity, intermediate code can be interpreted relatively quickly by the virtual machine i.e. the intermediate code interpreter. In C#, we refer to it as the CLR (Common Language Runtime), which is then fed right into our processor.

By using a virtual machine, we essentially eliminate both the interpreter and compiler's disadvantages, while still using most of their advantages:

Languages with VM are designed for object-oriented programming and is the most modern way to develop software. There are also languages of 4th and 5th generation, but they are very specific and we won't cover them today.

We've already explained how C# works. Now we'll go over what the .NET framework is. It is meant to cover four things: language, Visual Studio, Virtual Machine (CLR) and Libraries.

As I mentioned above, in .NET we have several languages in which we can work. C# is the most popular and advanced language of them, and it has been designed specifically for .NET.

Visual Studio is an IDE (Integrated Development Environment) - the environment in which we write source code and also helps us with the development itself. VS is respected even among the Java programmers. It is a modern IDE, that is free-to-use if you get the Community edition.

CLR is a virtual machine that interprets and executes CIL into instructions for the current CPU.

Libraries are probably the biggest advantage of .NET. Microsoft provides a complete set of libraries with pre-made structures and components, e.g. for console apps, databases, forms, etc. Since MS is also the author of Windows, their components fit nicely there. To run applications, it's necessary to have the same version of .NET on the target machine in which the application was written. The good news is that modern Windows versions always have .NET installed.

.NET has the following structure: 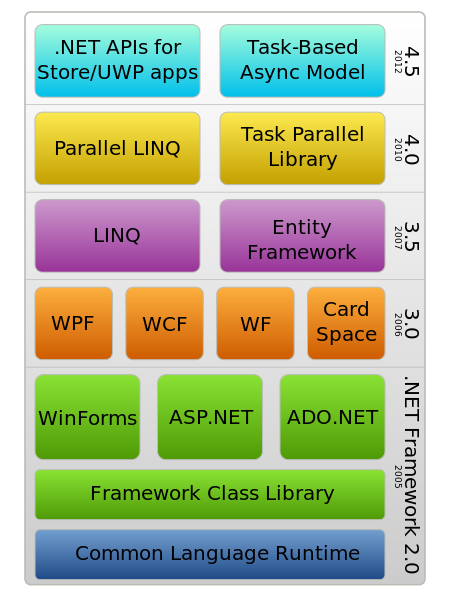 In .NET 2.0, we can see the actual CRL, virtual machine, and the Base Class Library. Version 3.0 brings new ways of developing form applications and workflows. Version 3.5 is especially interesting for us since it has brought LINQ, which we will get into later on. The next version allows the running of LINQ on multi-core processors. In 2012, version 4.5 was released. It simplifies writing asynchronous functions, which we will also cover later on.

Now we know what we're going to work with. In the next lesson, Visual Studio and your first C# .NET console application, we'll work with Visual Studio to create our first program.

All articles in this section
C# .NET Basic Constructs
Skip article
(not recommended)
Visual Studio and your first C# .NET console application
Article has been written for you by David Capka

User rating:
26 votes
The author is a programmer, who likes web technologies and being the lead/chief article writer at ICT.social. He shares his knowledge with the community and is always looking to improve. He believes that anyone can do what they set their mind to.

The lesson is very explanatory.

That leson is so great

Today my boss agreed to use c# for the new project! Time for me to switch from vb to c#. I like vb But it is time to move on!

Helpful detail, particularly on how .NET Framework fits into the picture. I wish I had found this when trying to teach.NET concepts to students. Thanks!